The Barrens.  Even the name doesn’t bring pleasant images to mind.  Across these dusty plains lies a couple of trees and maybe an oasis here or there.  The appearance just sets a somber tone for the many young Horde adventurers who will be spending a good deal of time here.  The lack of traffic has been noticeable to those who try to make a living in their harsh landscape.  Sergra Darkthorn, a well known figure at the Horde settlement of the Crossroads, was quick to air her thoughts on the problem: “Too many young ones are walking across the bridge from Durotar and seeing this wide flat mess of dirt and weeds that contains a couple of animals, and little to look it.  So they say why bother with the Barrens, spending hours killing quillboar to help the Horde and dealing with the cowardly Alliance attacks, we could just go hang out in the Ghostlands instead – it’s pretty there and they give nicer rewards too!  …By the spirits, I hate the Ghostlands.”

Sergra isn’t the only one to notice the lack of adventurers coming through the area.  Local legend Mankrik has been extremely distressed about the lack of aid, “I’ve written letters to the Warchief, I’ve asked every one of the vendors for help, and I get nothing. Without the help of some of these traveling adventurers, I don’t think I’ll ever find my dear wife.”  Mankrik’s wife went missing five years ago, and so far no one has been able to give him directions to her current whereabouts. “Oh I’ve seen some experienced soldiers coming in from Northrend.  Gussied up in their armor pulled off the dead of Icecrown.  Seeking me out for some story to tell.  They don’t care about my problems.  They drop in, say she’s down south somewhere, dead – They THINK. Then they put a notch on their sheet and off they go, trying to prove something I guess.”

The people of the Crossroads are not taking this lying down though.  They’ve begun what they’re calling the Big Barrens Beautification Project, or the 3B Project for short.  Working on creating a more presentable appearance across the Barrens.  “We’ve gone all out with some of these new ‘sight stations’ as we’re calling them.” says Boorand Plainswind, the innkeeper at the Crossroads, “We’ve flown in baskets from Thunderbluff, some fine rugs from Orgrimmar, and even the trolls donated some things.  We’re trying to make them as eye catching as possible.”

The technique has proven to be quite successful, as both the Alliance and Horde are taking notice of the new Sight Stations. We caught up with Orïgnalgnkstä, a night elf rogue, who had this to say about the changes: “I wuz all like time to go killz some lowbie hordiez, but den I saw this thing off the side of the road and I was like… whoa…  they gotz gongs and s*** out here now.”  Even some fresh young faces just heading out from Durotar commented on how eye catching they were.  Chainheelzftw, a troll shaman, shared her feelings with us: “I just saw this weird set up sitting over by the mountain.  It didn’t look like the Centaur made it so I like checked it out.  I mean it was like just a bunch of tarps and stuff, but it was like so random.  I just stood there wondering like… Why?”  One of Chainheelzftw’s friend, a Tauren by the name of Manox, mentioned that he found the stations to be “neat” and a “cool little detail”

So there you have it, some dedicated souls out here in the Barrens, trying to make things a little “cool”-er for all the world weary travelers out here. 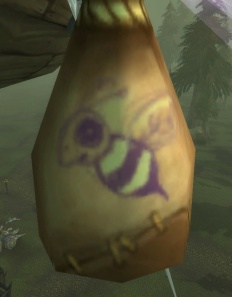 Those eyes... The eyes of the Diablo!

This oddity comes in via email from Umjin who simply asks “What’s the deal with the bees?” Included were several pictures of what you see here, drawings of bees on the sandbags of the Horde airships that transport people to and from Northrend.  I must admit, this one did stump me at first until I remembered a trip I had made a while back through the Barrens.  That trip is where I learned the darkest secret of the Horde and I hesitated quite a bit about even posting about it in fear of what the Alliance might do with this knowledge. But Umjin wants to know, and I’m sure you all do too. So here it is.

The Horde is afraid of Bees.

Even Batman fears the power of Bees!

It’s true.  While making my way towards the Crossroads I found Trok, a young orc who was running day and night from this malicious insects.  I tried to talk to the little orc but he wouldn’t stay still for a single second.  He would just keep running from the bees who endlessly chased him around the plains.  I was admittedly concerned for Trok, especially after he continued to call for help from his sister Karu, who didn’t even lift a finger to aid him.  I would soon learn that this girl was not a coward but as sagely as the shaman Kranal Fiss (who I can only assume is their father.)  You see, I tried to help Trok with his bee problem.

I tried every attack and every spell I could muster attempting to stop the assault of the tiny winged fiends but it was no good.  They were too small, too quick and too agile to be stopped by brute force.  That is their greatest strength.  An orc specializes in smashing and slashing, a tauren could stomp you into submission, and a troll could throw a thousand knives at you in the blink of an eye – but what are these strengths against the masterful dodge and sting attacks of the bee?  This is why the wise Karu doesn’t aid her brother.  She knows that to fight the bee is to lose to the bee.  She understands the bees’ strengths, and she knows that a lowly orc has no chance to take down this cunning beast.

Everyone in the Horde knows and fears the strength of the bee.  There is no armor infiltration proof enough to stop them, there is no weapon quick or accurate enough to kill them and there is no spell that they are not able to avoid.  Truly the bee is a force to be reckoned with.  The Alliance only wishes they could possess the power of the bee, I know the goblins do.  Why else would they design many of their zeppelins to look like bees if they weren’t attempting to harness this power?  To decorate your vessel with the bee is to will your vessel to fly with the power of the bee!  After all, there’s no way a bee can actually fly, yet it does.  Wouldn’t you wish to infuse your flying ship with the power to defy physics itself?  I know I would.

So perhaps that is why they paint them on the sandbags, as a way to show that the horde and their zeppelins will defy logic and the world to do what they do.  A truly powerful sentiment that shall ever endure as a testament to the strength of the Horde’s aerial prowess.

That or it is the absolutely dumbest form of camouflage I have ever seen. No no no, we’re not a horde war zeppelin. Nope. Just a bunch of bees. Bzz bzz bzz. /sigh