His name is Steven Lohan.  He works and operates a small tavern in the mage district of Stormwind.  He has a brother, he has employees, and he seems to have a good life.  But Steven Lohan is a lie.  Because in the chaos and panic of the Shattering, as Deathwing destroyed the Park for the sake of plot convenience for when Chris Metzen had no real answer as to why the worgen had go to Darnassus, the man who was once named Steven Lohan was silenced, and without a single soul noticing, vanished from the world in a flash of claws and a small splash of blood on cloth.

Why do I say this?  What right do I have to claim that this “man” is not Steven Lohan?  Because during Patch 4.0.3a, something happened to good old Steve.  He started saying funny things.  With an accent he previously never had before.  He began barking, “Get gabbin’ or get goin’!” at patrons.  No one knew what to make of it – it was such an odd thing for him to say. However, if you asked a night elf about it, they’d know instantly that this new Steven Lohan is not a Stormwind resident at all…  BUT A GILNEAN INFILTRATOR! (Dun dun Duuuuun)

No joke, for some reason when Cataclysm hit the live servers, this random guy who no one really had any reason to interact with in the game (I don’t think he even had any dialogue besides the normal click-on-them responses) just suddenly and without reasoning decided to become a Gilnean.  This is an excellent argument for the people who want to claim that there are worgen in Stormwind just hiding out in human guise, because well… here’s one.

Granted, there’s the chance that Stevie was a defected Gilnean that struggled against the odds to climb past the Greymane Wall, survived the harsh trek across the haunted vales of Silverpine, the warzones of Hillsbrad, the beastie infested swamps of the Wetlands, and the Dwarf riddled lands of Dun Morogh until he eventually made it to Stormwind where he learned to suppress his accent and worked as a shoe shiner until he had enough money to open up his own tavern.  However, things turned for the worse and a warlock bar opened up just up the street, and thus began a life long rivalry as Steven fought and struggled with his family, his alcoholism, his stressful marriage to a Kirin Tor woman (they are very strict) in the Lifetime Original Movie… Howling for Home: The Steven Lohan Story.

That or he was a worgen that showed up and killed the original Steven and took his place.  You tell me which sounds more likely.

A Wizard Did It: Stormwind Mage Quarter

“I meant to do that.” – Random Mage Flying Through a Window 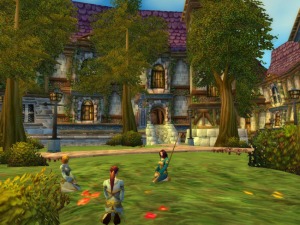 Perhaps taking a break in the serenity of nature will keep my mind off of the immense greed and corruption of the Trade District.  So a quick jaunt over to the Mage Quarter is in order.  The architecture is very different in this area compared to that of the Trade District, the buildings seem to be older, there is a distinct purple motif (I blame Dalaran for the whole Mage = Purple mentality), and the roads are all paved in grass.

What?!  Who in their right mind thought this would be a good idea?!  I can understand the mentality of having grass roads in The Park (We’ll get to that fruitcake factory in a bit), but at what point did the Stormwind designers sit there and say “Mages like grass right?” “Oh yea! They use that arcane magic… which is from like nature and stuff right?”  Surely, no logical train of thought could reach the conclusion that grass roads are appropriate here.  Luckily (or unluckily), the lack of logic does not stop at the roads.  Shall we?

Only You Can Prevent Start Fires!

You would think in a district that is mostly covered in grass in a city that has already been burned to ground once, controlling outbreaks of fire would be a priority.  You would be wrong.  In the corner of the Mage Quarter is a small shop that is simply called ‘Pyrotechnics.’  What do they sell?  Things that start fires, of course!  More specifically: fireworks.

Judging from the overall lack of stock in the shop (in comparison to the majority of shops in Stormwind), business is not doing well.  Even the shop owner, Darian Singh, looks a little depressed about it.  Now, I am not a business expert by any means.  Heck, my auction house profits were noticably low this last quarter (Damn battered hilt impulse buying).  But if you are going to open a shop that sells fireworks (I should say firework, cause all he actually has in stock is the red fireworks and a schematic for the blue fireworks), you might not want to do it in the second most flamable area in Stormwind.  Just a hunch.

I actually want to know why he did it.  What was the deal he must have scored to decide to open up a fireworks shop here.  Maybe the rent is really low?  That would work.  It would explain the abundance of poorly kept and redundant shops in the Mage Quarter (How many Herbalism shops are there in Stormwind?)  Maybe it’s  an attempt to appeal to the mage audience.  After all, they shoot fireballs.  Fireworks are kind of like fireballs.  So maybe there’s an appeal there.  But if mages (AND warlocks) can shoot fire, why would they want to buy fake fireballs?

Is it for the mage wannabes?  People who aren’t mages or warlocks but want to act like them?  Do such people exist?  Well I suppose if there’s a tauren who wants to be a rogue, it can’t be out of the realm of possibilities for there to be people who want to be mages.  Still, seems like a weak premise to invest in starting an entire shop for.  At least it explains the lack of business.

Could I Interest You in a Skull or a Rabbit?

Even if Pyrotechnics is a stupid idea for a shop, at least I know what they sell.  There is another shop in the Mage Quarter called Ancient Curios.  Now this shop, I have no idea.  Technically, they sell reagents but there is no possible way you would know that from simply looking inside.  The place is decorated with skulls from various animals in Kalimdor, strange looking weapons, alchemical supplies and there’s a rabbit sitting on the counter.

Every other shop in Stormwind, you can usually gather what they sell by their surroundings.  Herbalism shops are full of flowers, the weapon shops have racks of swords and axes, and tailoring shops have fine clothing on display.  But what does having some weird staves and a couple of plainstrider skulls have to do with magical trinkets? I mean, I can kind of see the alchemy stuff being related to reagents, but that’s about it.

I really don’t get the rabbit though.  Are they going for a Magician’s Rabbit thing?  That it’s supposed to hop out of a hat or something?  But there is no hat.  None.  So what’s the deal with the rabbit?  It’s never addressed. It just sits there.  More importantly it sits on the same table as the weapons, alchemy supplies and skulls.  So…  can I buy the rabbit?  Is the rabbit a reagent?  What spell uses a rabbit as a reagent?!  I will admit, I haven’t played every class in the game to max level.  So I don’t want to rule this option out.

Maybe it’s for a druid form?  You wanna switch to cat form, but your cat form doesn’t want to… um… emerge because it’s hungry.  Use the rabbit to lure it out!  Or maybe its used for a special mage portal.  You know, like the rabbit in a hat trick.  I would try to imagine what a warlock would use it for but that becomes very disturbing, very quickly.

I actually thought the rabbit was the vendor at first.  Magic spell gone wrong or something.  It would explain why no one had bothered to clean the massive cobwebs that had formed around the shop.  But no, the rabbit isn’t the shop keep. It’s just a rabbit.  That stares at me.  And never blinks.  I’m not shopping here anymore.