← FFXV: Vry vs The Pit of Eos Theory
A Trailer That Remembers the Face of Its Father →

Switching On To The Switch 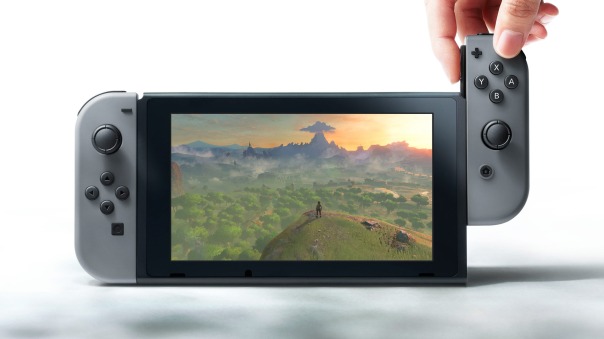 So last Friday, I got my grubby mitts on the new Nintendo console, the Switch.  I didn’t camp out or anything like I did with the Wii.  After having that experience once, I am quite satisfied with just pre-ordering off of a website and waiting for the mail man.  I’m getting old. I ain’t a whipper snapper no more.

Honestly what confused me more so was that people asked IF I was going to get a Switch.  As if there would be some reason I wouldn’t?  I guess people just assume when they see my Wii and Wii U that I might have felt burned by Nintendo in the past with these “dreadful” systems.  Which only makes me laugh.  I have NEVER been dissatisfied with a Nintendo console.  Not once.  Heck, I thought the Virtual Boy was pretty awesome when it first came out.  I still think it was one of the most forward thinking consoles ever made along with the Dreamcast.  Go back and look at the Virtual Boy and tell me that thing doesn’t look like the equivalent of the Game & Watch devices for the modern Vive or Gear headsets.  Nintendo systems are always kind of this weird nostalgia trip anyway.  When they were current both the Nintendo 64 and GameCube were mocked for having small game selections that trended toward “casual” or “kiddy” games unlike the then rising star Playstation & Playstation 2. Nowadays?  People pine for the days of the N64 or ‘Cube.  People sing their praises now that they’ve passed into the realms of nostalgia.  But hey, I still loved those consoles when they were current.  My PSX was used for Final Fantasy.  Everything else? Nintendo 64.

So when people point out things like the weird gimmicks or the small launch selection, I can’t help but shrug.  The Switch is no exception.  It looked fun as hell and I’m happy to say that I wasn’t disappointed.

The Switch itself is surprisingly compact.  Even with the JoyCons attached to the side of it.  It actually kind reminds me of a skinny Game Gear in that sense but with a bigger screen (Maybe a bit longer battery life).  It’s definitely not like the 3DS where I can just stick it in my pocket but it would easily fit in a backpack, messenger bag, or purse.  The stand on the back is NOT as flimsy as I’ve seen people complaining about, at least not in my experience.  I’ve used it in the kickstand configuration a few times and the only time I had trouble keeping it standing up was when I tried to do it on a non-solid surface like a sofa cushion or the bed.  The kickstand set up is probably my favorite configuration outside of putting it on the TV so far.  The JoyCons connect wirelessly so you can just have your hands in any position you want while playing.  I was at my sister-in-law’s hookah lounge/tea shop/gaming emporium (Check out the Lair of Abraxas if your ever in the Denver Metro area. #Plug.) with the Switch set up on the table and my hands crossed underneath and just playing away without a concern in total comfort.  It’s hard to explain why but something about the fact that the JoyCons fit in your hand and are connected to nothing just gives you a lot of freedom to play comfortably.

The biggest technical hurdle I’ve had so far was honestly getting my TV to display a decent picture, and that’s really more so the TV’s fault than the Switch so I can’t complain too much.  But if the saturation or brightness of the image seems too much or the anti-aliasing seems choppy on your TV, you might want to play around with the settings some.  For me, it turns out that Gaming Mode on our TV isn’t so good for gaming, but HDR+ mode makes the games look great.  So you might just need to fiddle in the settings until you find one that looks good for you.

These things were my biggest worry when it came to the Switch.  I mean, they LOOK tiny right?  And they are.  Kind of.  My hands can fit around them easily enough that I can play without any discomfort or crab claw hands.  The buttons are about the size of the ones on a 3DS so if you don’t have an issue there, you won’t here.  I won’t really know what to say about them in terms of gameplay until probably next month when I pick up Mario Kart 8 Director’s Cut or whatever they’re calling it, but I don’t anticipate too many issues.  Regardless, I did get a Pro Controller to use just in case.

However, one thing that was both cool and weird at the same time is actually feeling the HD Rumble do its thing for the first time.  While I didn’t bother with 1-2-Switch, there are a few moments in Zelda that use it and its just kind of neat.  Feeling the water run down a stalagtite before dripping down as you watch it on screen is definitely a nice touch of immersion.  I’ll be curious to see how developers will use it moving forward.

I only grabbed two games at Launch: Zelda and I Am Setsuna, and over the weekend I only really played Zelda.  I was tempted to go for Bomberman as well, because I remember playing the heck out of BomberMan 64 back in the day, but I felt it was one of those wait and sees.  Meanwhile, the next Zelda game and a retro send up to Chrono Trigger style RPG?  Heck yes I will be playing those.

Zelda is gorgeous and pretty much hits all the right notes.  The gleaming reviews are everywhere so I don’t think I need to sell you on the game, but I will touch on the highlights for me:

So that’s my early impressions of playing with the Nintendo Switch over the weekend.  Once I get an actual multiplayer game, I’ll probably post my Friend Code somewhere so you can friend request me or something.

Posted on March 6, 2017, in Gaming and tagged botw, breath of the wild, Nintendo, switch, zelda. Bookmark the permalink. Leave a comment.

← FFXV: Vry vs The Pit of Eos Theory
A Trailer That Remembers the Face of Its Father →