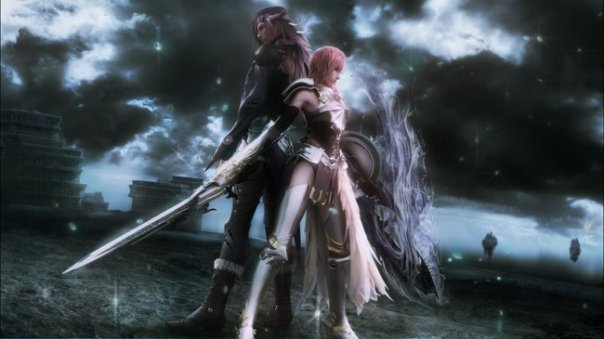 So now that we’ve gotten the characters out of the way, we should discuss the story a bit.  Really, pretty much everything in Final Fantasy XIII-2 is a step up from the original.  The crystarium offers more choices, there are side quests, the plot doesn’t really require a crap ton of external reading to make sense, and the whole thing is more of a fun adventurous romp through time and space than a dreary struggle to survive and usurp the god-like powers that rule over us.  Sort of.  In the end, it’s best explained that XIII-2 is a more complicated Chrono Trigger, but not as complicated as Chrono Cross.  Which is a very good description, unless you haven’t played those games at all.  Which in case you haven’t…  shaaaame.

Allow me to go into things a bit more so you have a better idea of what I’m talking about.  Fair warning, ye travellers of the interwebs, thar be spoilers ahead.  Of course, most people hate the now titled Lightning Trilogy of the Fabula Nova Chrystallis, so I’m not sure anywhere cares if I spoil things.  Still, you will complain about the lack of warning regardless of whether you cared. I know you too well internet.

The general plot follows four characters and their separate goals.  There’s Serah who wants to travel to the end of everything to find her sister who fights a never ending war in the land of the dead.  Her partner in all this is Noel, the last human who was conscripted by Lightning to help Serah who wants to change history so that his time doesn’t completely suck as much with everyone being dead and whatnot.  Next is Hope, who is now aged up since the first game and is working on advancing humanity to prepare for the potentially doomed future and also enjoys freezing himself with hundreds of years at a time to do so.  Finally, there’s our sort of villain Caius who wants to create a world where Yeul will stop dying over and over.

Serah and Noel travel around time and space using time gates (Chrono Trigger people, starting to see similarities yet?) and by travelling through different times, they work to solve Paradoxes – errors in the time stream – to find anachronistic fragments of time that will allow them to open other time gates and eventually work their way to Valhalla at the end of time.  The hitch to this whole thing, is that every time the timeline changes, Yeul the Seeress gets a vision of the new future and it sucks a bit of her life away, hence her constant dying.  This puts Noel and Serah in direct confrontation with Caius, who is either trying to preserve the timeline, or destroy time completely by flooding reality with a force known as Chaos that dwells in the Unseen World of Valhalla.  How does he plan to do this?  Why by finishing the fal’Cie’s goal from the first game and killing a ton of people to open Etro’s Gate wide enough that the Unseen World pours into the Seen Wold.

It’s at this point that I feel it’s important to revisit the cosmology of the Fabula Nova Chrystallis mythology. In reality, there is the Seen World – the physical real world where time flows, the fal’Cie of Lindzei and Pulse once ruled, and was shaped and formed by Bhunivelze, God of Light – and then there is the Unseen World – the land of the dead, also called Valhalla, floating in a sea of Chaos where no time exists and God (Bhunivelze) cannot see into, hence the name Unseen World. The whole set up for the Lightning Trilogy is that God wants to find the Unseen World, so he goes into hibernation while his servants: Lindzei and Pulse, and their servants – the lesser fal’cie and thus the l’Cie – search for a way to get into the Unseen World.  That’s ultimately very important to what happens in Lightning Returns.

There’s also part of the mythos that when Etro killed herself and descended to the Unseen World, her blood was  to shape the first humans. The very first one being a girl named Yeul, formed to look like Etro herself.  However, something strange happened when Yuel passed on to Valhalla: she did not fade away like other souls.  Trapped there alone and without anyone, Etro pitied her and sent her back to the land of the living, gifting her with the Eyes of Etro which allowed her to see the future and giving her a protector and eternal companion – the Guardians, a long line of warriors entrusted with the heart of Etro herself.

Caius plans to do this by destroying Cocoon and dropping into on to Gran Pulse just like the fal’Cie did.  He works throughout the time stream to cause the crystal pillar formed at the end of the last game to erode.   But Caius isn’t the kind of person to let things ride on a single plan that has already been thwarted once before. No, no, no. Caius has a secondary plan.  He plans to die.  That’s right, because you see, part of his charge as the protector and companion to Yuel, Etro had to make sure he wouldn’t die and fade away like everyone else besides Yuel.  So the Goddess gave Caius her heart.  The Heart of Chaos as it has been called. Which makes him effectively immortal.  It heals him, it gives him eternal youth, and it makes him nigh indestructible.  But if someone were to kill him, they would effectively kill the Goddess at the same time and destroy the only force holding back the chaos and keeping it sealed in the Unseen World.  So if he wins or loses, he wins.

And that’s the big thing at the end of the game.  After all the altered time lines, changed futures, and more Yuels than you can shake a stick at, you finally showdown with Caius and defeat him, and he demands that you kill him.  You can choose to refuse, but if you do all it does is Caius forces himself onto Noel’s twin blades and impales the Heart of Chaos.  And thus the timeline changes, Yuel dies and so does Serah as she also gained the “gift” of the Eyes of Etro along the journey (Potentially due to Etro’s involvement on the Day of Ragnarok at the end of the first game, which would explain how Serah knows about Lightning surviving and everyone else thinks she is trapped in the crystal pillar) and with the Goddess’ heart destroyed, the chaos pours out of the Unseen World and floods the Seen world, merging the two into a new reality with no time.  Caius wins.

Yea.  You heard me.  In the end of the game, Caius wins. Bad guy victorious.  World doomed.  The real downside is you just spent half a game trying to work with Hope to find a way to save all of humanity and now it’s all null and void.  On the upside: HOLY CRAP THE BAD GUY WON!  How often does that happen?  There’s even a secret ending showing Caius smugly looking victorious as the world reshapes itself.

In the end, the story is really good.  It’s downright enjoyable.  It’s not a slog to figure out exactly what everyone is doing and why, motivations are simple and to the point but still grand in scale.  The ending however puts a damper on things.  It undoes most of the work you’ve done through the game, which really makes things feel like a waste of time.  Of course, none of those things would have happened.  And I’ll admit that was irritating, but not wholly a deal breaker for me.

As I said, they did away with all the countless pages of external research to understand the basic plot. Oh sure, the deeper nuances like the nature of Etro, or the history of the Seen and Unseen worlds are not fully fleshed out except in the datalogs. There’s also some random little elements in the game that are never really explained at all in the game or the logs.  Like when you run into Snow.  How did he get lost in time?  Why does he have a l’Cie brand again?  This is apparently all spelled out in a novel that was released in Japan.  There’s actually like three or four novel tie-ins to the game that explain a lot of the details for the smaller elements.  More explanation for Caius and Yuel’s relationship, details about Snow, and a bunch of other things.  Though in the greater plot, these don’t really bear any great weight.  The paradoxes that occur are more than enough explanation for the weirdness that pops up in the plot, like Snow and Sazh’s inexplicable time leaps (Hope’s is actually given a fairly thorough explanation.)

So in terms of sheer narrative after playing the entire Lightning Trilogy, this game is really my favorite story.  It’s a fun adventure.

Next time I’ll to talk about the mechanics a bit more.

(Just an afterthought, I know some people often wonder why it’s Lightning and Caius on the title logo instead of Serah and Noel.  Really, the entire story is a giant chess match between Lightning and Caius. Serah, Noel, Mog and Hope are Lightning’s pawns in trying to thwart Caius’ attempts to end the world.  So that would be why.)