← Night Elves are Pervs
Remembering to Play the Part →

Telling the Tale: Reflecting on Wrath 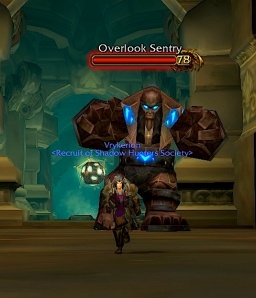 Eat your heart out, Michael Bay.

In case you didn’t know, Loremaster is the end goal for every max level toon I’ve ever had.  To date, I have three toons with the uber-nerd-tasti-fied title, and each time is more enjoyable than the last.  Considering I did it the first time Pre-Cata before there were add ons to tell you what quests you’ve missed, ‘more enjoyable’ is easy to accomplish.  This last trip around the wide world of Azeroth, I decided to finish with Northrend.  I have fond memories of this expansion.  If you asked me a month ago why, I probably would have simply chuckled and said it was pointless nostalgia.  But it isn’t.  There is something different in the cold winds of Northrend.  Something that has helped me close in on the very issue with Cataclysm that has been banging around in the back of my head since I first got to 85.

Wrath of the Lich King excelled in one magnificent thing above all others in my book.  My book of course being the one that says a good story trounces over balance issues, bad design, and buggy gameplay.  I’ve been known the overlook some nasty problems with games in my day for the sake of story.  In this age of “We’ll release the game and patch it later”, it has proven to be a necessary ability.  I’m willing to work around the Silverite Mine bug in Dragon Age that deletes your inventory because I want to see what happens.  I don’t care if every cave in Dragon Age 2 is identical because I’m not there to explore caves, I’m there for the plot… and Merrill.  You get my point.  And if there was one thing that I will defend Wrath of the Lich King it was its story.

Don’t get me wrong, I love Cataclysm’s storylines.  Becoming the Herald of the Ancients and ushering in their return to save the World Tree from the forces of Ragnaros and Twilight’s Hammer.  Aiding the Earthen Ring in repairing the World Pillar and confronting all the various factions that operate in the Plane of Earth.  Though I must say helping throw a dwarven wedding beats out enlisting the Dragonmaw into the Horde.  Cataclysm had well told storylines.  The problem was they really didn’t have anything to do with each other.  Nothing that happens in Hyjal has any significance to the events in Uldum.  No one in the Twilight Highlands seems to care about what occurred in the depths of Vash’jir.  In fact, the only consistent threads through the five zones are strictly thematic in nature: the elements, the end of the world, etc.  That has been my biggest issue in Cataclysm, that the major plot seems thematic instead of narrative.  By which I mean there is no ‘overarching story’ to the expansion, just an ‘overarching theme’.  It’s like the Final Fantasy series.  Each game has its own plot, and each game tends to touch on the same general themes, but aside from the rare occasion (X & X-2, Tactics & XII), there is nothing story-wise connecting the games.

In Wrath of the Lich King however, the story was structured so that some plot threads resolved in the zone, and others built throughout the continent.  For instance, Yogg-Saron is first hinted at in the gorge in the Howling Fjords, it is not given a name until the Grizzly Hills, we are given glimpses of its influence and power in Storm Peaks and Icecrown, and we finally face off with the beast in the Ulduar raid.  Same with Loken and his meddling behind the war behind the giants and the iron dwarves.  There are many more: The development of the New Plague, the plight of the Taunka, the Nexus War, discovering the ancestry of the Gnomes,and  the various misadventures of the Brothers Bronzebeard.  These are on top of the normal zone specific plot lines that are going on.

Everything seems so connected in Northrend.  The same spirit has been extended to many plotlines in the revised 1-60 experience as well (In Ashenvale, you help design and build the bomb you drop on the druids in Stonetalon).  But not in the 80-85 part of Cataclysm.  The strongest narrative tie is probably that the Molten Front serves as a ‘sequel’ to what happened in Hyjal, but that is more or less the same zone.  Burning Crusade had a similar issue, but even then there were a small handful of plotlines that would pop up here and there, like Pathaleon the Calculator’s experiments for his master, the Blood Elf dependence on finding a new power source, etc. But in the end, because of this strong narrative thread, Northrend is much more enjoyable for me to level through than Burning Crusade and Cataclysm.

In summary: Yes, thus far Wrath was my favorite expansion.  No, it didn’t have anything to do with anything being “easy mode”. Yes, Merrill is adorable. No, I am not wearing lederhosen for Brewfest.

Posted on September 24, 2011, in World of Warcraft and tagged burning crusade, Loremaster, merril is cute, Northrend, plot development, storytelling, Wrath of the Lich King, wrath of the lich king. Bookmark the permalink. 1 Comment.

← Night Elves are Pervs
Remembering to Play the Part →