← Blizzard Giveth and Blizzard Taketh Away
What Doesn't Kill Ya: My D&D Injury System → 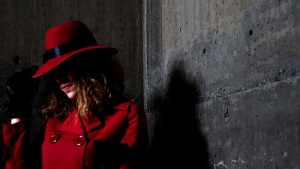 Film Noir meets Children's Edutainment... What is not to like?

She’s probably one of the longest running gags in edutainment.  She’s spawned boards games, a game show, a great cartoon, and one of the world’s most popular a capella songs.  She’s the ever elusive klepto queen that is recognized by everyone and yet not a single soul could tell you where’s she is going.  Carmen Isabella Sandiego is a staple of almost every 90’s kid out there, and yet I find that she’s probably one of the most taken for granted characters out there.  Mostly because no one exactly seems to recognize how much there is to the character beyond a catchy song and that steals things.

I was actually pretty surprised to learn through the years that there is actually quite a bit of backstory to the fashionable and flirty filcher that a lot of people (or at least most people I know) never seem to see or notice.  Now there’s actually several different iterations of Carmen’s backstory depending on what you’re watching and/or playing.  My favorite is still the animated TV show ‘Where on Earth is Carmen Sandiego?’ simply because it seems to give the most substantial back story to explaining Carmen’s personality and development. 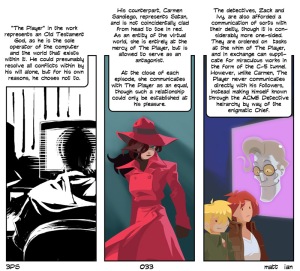 Probably the most profound analysis of Carmen EVAH (Source: ThreePanelSoul.com)

My favorite thing about Carmen was that she’s not an out and out villain.  Far from it.  She actually used to be an ACME agent (ACME, for those who don’t recall, was the name of the detective agency that the player in the games, and Zach and Ivy in the cartoon, belong to) and was actually their star agent.  By the age of 17, Carmen had solved more cases than any other agent.  There are also plenty of hints that since Carmen was originally an orphan before coming to ACME, she and The Chief (who in the cartoon is a giant floating head on a TV screen) had something of a father/daughter relationship during her tenure as an agent, to the point that at one point where Carmen fakes her own death, the Chief becomes severely depressed for a good part of the episode.  No, I have no clue how that relationship worked.  Especially since there’s a number of theories that the Chief doesn’t really exist and is just an in-universe avatar for The Player, a silhouetted child at a computer who we only see communicating with Carmen through text and voice over.  Maybe it’s one of those ‘Can love exist between a man and an AI?’ kind of things.  Asimov would approve.

The problem was Carmen was so good at solving crimes, she found them dull.  It was because of that sheer boredom and lack of a challenge with stopping crimes, she realized what would be more challenging (and by her logic, more fun) would be to commit the crimes and try not to be caught.  Thus Carmen Sandiego left the ACME Detective Agency and formed VILE (Villain’s International League of Evil).  It should be of note that there is some dispute on this matter as there are several episodes of the show where she was seen alongside some of the other VILE villains and it is open to interpretation whether or not she could actual be considered the leader of this organization or simply a member of it.  It’s also completely possible that VILE has no such hierarchy amongst its members (beyond that of Villains and Henchmen), creating an opposing structure to ACME which clearly had a chain of command.  After the formation of VILE, Carmen begins her grand game.  Needless to say, she demonstrates repeatedly through the TV show that she is no longer bored.  Not even a little.

But she is still sentimental.  As shown an episode where after a series of Oz related clues, the gumshoes eventually track Carmen to the orphanage in San Francisco where she grew up, she actually steals the entire orphanage the night before it was torn down.  There’s also the show’s finale where  Carmen mid-heist accidentally finds a portrait of a woman who matches the photo in a locket she has had since she was a child.  The portrait is of the deceased wife of a wealthy man named Malcolm Avalon, and Carmen begins to wonder if these two may have actually been her biological parents.  This revelation causes her to make mistakes, get caught by ACME (and quickly escaping again), and being blackmailed by a two-bit former ACME agent thief named Lee (He is stealing TVs when we first see him, not the Statue of Liberty like Carmen would.) 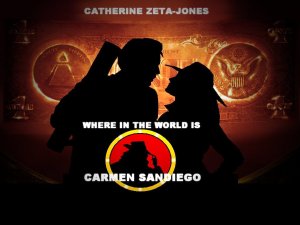 Get Bryan Singer to direct and I'm there opening day.

Carmen also operates to a set code of ethics, she will never steal something that would cause harm to people.  She’s not going to jack your college fund, but a priceless painting in a museum? Why not.  I suppose that’s a bit simplistic as it could be argued that EVERYTHING she steals will eventually hurt someone in some way.  The curator of the museum would be fired, the ACME agents routinely risk life and limb trying to get the stuff back, etc. But I suppose if there is no immediate and apparent harm done by the Mona Lisa vanishing or the pyramids of Giza being airlifted to some unknown location, then it’s okay by Carmen’s standards.  However, she does hold to this pretty rigidly, occasionally even assisting the ACME agents in catching criminals that would do direct harm with their heists, getting back to her roots as an agent and taking on the persona of a semi anti-hero for an episode or two of the show.

I was actually surprised how engaging she could be as a character after going back and watching a lot of the cartoon show.  She is prideful and teasing to both the agents and the player.  She is a fallen angel and temptress of agents, often attempting to goad them into helping her willingly or unwillingly by relying on them to chase false leads in order for her to make the big score.  One thing she is not however is a simple female counterpart to Waldo.  Waldo gets lost, Carmen hides.  Waldo wants to be found, Carmen does not.  Granted, they both had a cartoon, and they both are actively sought, but they are so not the same thing only gender bent.  That is an insult to the complicated character that is Carmen Sandiego.

← Blizzard Giveth and Blizzard Taketh Away
What Doesn't Kill Ya: My D&D Injury System →